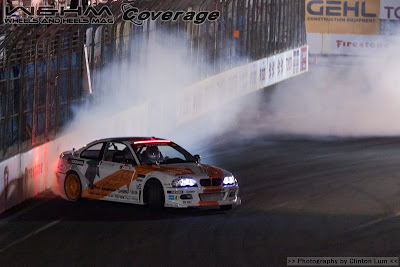 Long Beach, CA (Photo by Clinton Lum, Text by Py) - Drifting has traditionally been a niche motor sport among enthusiasts and fans.  It has a dedicated following and has been growing stronger over the years.  Besides making the various outreach moves to mainstream media and partnership to embolden the sport's presence, Formulo DRIFT, the leader in this genre or motor sport, made another milestone step by hosting the first Motegi Racing Super Drift Challenge inside the Toyota Grand Prix event.  Thus drifting has been introduced to the massive crowd of the Grand Prix fan-base.  It's a great move and a rewarding one too, judging from the feedbacks and coverage.

The competition had the top 16 drift drivers from Formula Drift vying for the $25,000 purse.   With all the smokes and knocked-out parts cleared, and excitements and surprises subsided, the winner is Matt Powers with his Fatlace/Nitto Tire Nissan  S14.  Michael Essa with GSR Autosport/Yokohama Tire BMW M3 took the second place, while Walker Wilkerson and Frederic Aasbo for the third and fourth.